A Degree in Donkeys

As the final semester ends for many universities, graduation ceremonies begin.

One of our own members, Robert Wallace, has just completed his undergraduate degree in Equine Management with Honours at the College of Agriculture, Farming and Rural Enterprise in conjunction with the Ulster University. Robert received his first donkey at a year old and at seven years old began carriage driving with his donkey, Denis, who he still has. Donkeys have shaped his academic life, with his dissertation studying if donkeys can recognise human expressions of emotion, which they can his research shows!

Robert had asked if he could bring his donkeys to his graduation at the Equine Campus in Enniskillen although the suggestion was declined he was able to get photos wearing his gown and cap with his donkeys on his farm in Ballynahinch, Co. Down.

Robert is now going on to take his new business, Kinedale Donkeys, on full time, where he supplies donkeys for therapy and event hire as well as inviting visitors to his activity farm where people can interact and learn about the wonderful nature of donkeys. 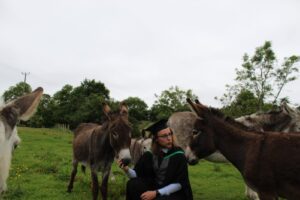 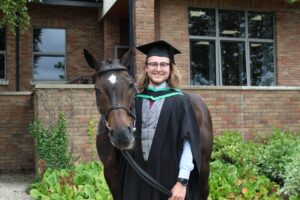