Within an ass’s roar of old Ireland 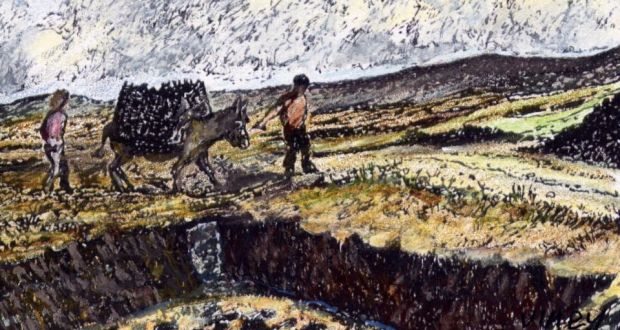 Below snowy mountain, on a morning of tentative, feathery flakes from the east, the high, sepia sweep of the bog looks like the last place anyone of sense would want to be. Yet I remember him, always the first man up to Ceannacoille, riding past the gate astride the haunches of his donkey and, raising an arm with a bellow of greeting, jogging off to start cutting in the drying winds of March.

He worked alone and unremittingly. On days when squalls of rain would drive me home from the bog, he hunched into a three-cornered cowl of sacking and waited on the passage of clouds like a peasant figure from the Andes. “The old people used to say,” he boomed, “that if you haven’t got your turf out from Ceannacoille by June 24th, you won’t have it home at all.”

It seems another life, indeed, the few years we spent cutting our own. It didn’t feel like history, yet, like the meitheal of our neighbours tossing silage with their kinfolk, it turned out to be. The machines were already beginning to move in, usurping the communal spring move to the bog, the family processions with kettles and soda bread, along with a sharpened sleán. Mine has rusted now, too, in a corner of the shed, and the twin cliabhs and sugan from an ass’s working apparel have long scattered into wormy twigs and straw.

Gone, too, of course, the donkeys that were asses to everyone else. I miss the occasional bray that spoke of their survival on our hillside. Close to, the most shocking of animal sounds, dredged up in a half-strangled two-tone blast that could make an ass fart with the effort, it was designed for distant contact in the deserts of Nubia and Somalia. What prompts it, exactly, and at what moment, is part of the secret cerebration for which donkeys are justly renowned.

The working ass was so much part of Ireland’s rural iconography that its origins need a reminder. It was brought in at the start of the 19th century to replace the farm horses being shipped off to Spain, where Wellington was fighting the Peninsular War.

In John Feehan’s monumental history Farming in Ireland (2003), the livestock figures show “mules, jennets and asses” at 126,000 by 1847, double that or more by the start of the 20th century, and a steady decline thereafter. (You may wish to know that the cross begotten by a stallion on a female donkey was technically a hinny but was called a jennet anyway, while a mule was got by a jackass on a female horse.)

At their useful peak, an export market saw hundreds of Irish donkeys, in long strings, trotting ahead of their drovers on roads to the east-coast ports. Shipped to Wales, they set off again on foot, many to end up in the weekly market at Islington, in London, which sold 3,000 donkeys a year. As Ireland’s modern turf harvest was turned over to machines, one new export market led north to pet-food factories in Scotland.

But donkeys make excellent pets, too, and their fortunes changed again as the boom years found them welcome in family paddocks (often “to keep the pony company”), with the Irish Donkey Society, founded in 1972, to offer advice on their care.

In 2008, the economist David McWilliams noted a tripling of donkey prices in three years in Connemara as turf-cutting farmers responded to the high price of tractor fuel. But Ireland’s donkey-rescue centres continued to cope with the wave of neglect and abandonment that followed the national crash.

In 2011, the long-established centre near Mallow, in Co Cork, an Irish branch of the international Donkey Sanctuary charity founded by the late Elizabeth Svendsen, declared itself “inundated, with more than 240 donkey rescues in the last year” – a service acknowledged in a €50,000 grant from the State. The same wave of abandonment had the Sathya Sai Sanctuary Trust for Nature, at Castlebaldwin, Co Sligo, urgently raising money for more land.

In the UK, a striking three-quarters of the donkey population now grazes on land owned by the Donkey Sanctuary in Devon. This, as Angela Dyer writes in Donkeyness (Pelem Press, £12.95), does rather raise the question of what donkeys are for. An awful lot of rot, as she says, has been written about them, but her book does much to explain how donkeys continue to earn their place on the planet, both as piled-upon beasts of burden and intelligent companion animals.

Her own relationship with them began in Ireland, continued in Spain and is now pursued in the bleaker reaches of Brittany. She celebrates it with great verve and research, in discerning the qualities of donkeys that make them anything but stupid or comic. My own brief experience, with asses borrowed from indulgent neighbours, suggests they almost always know best.