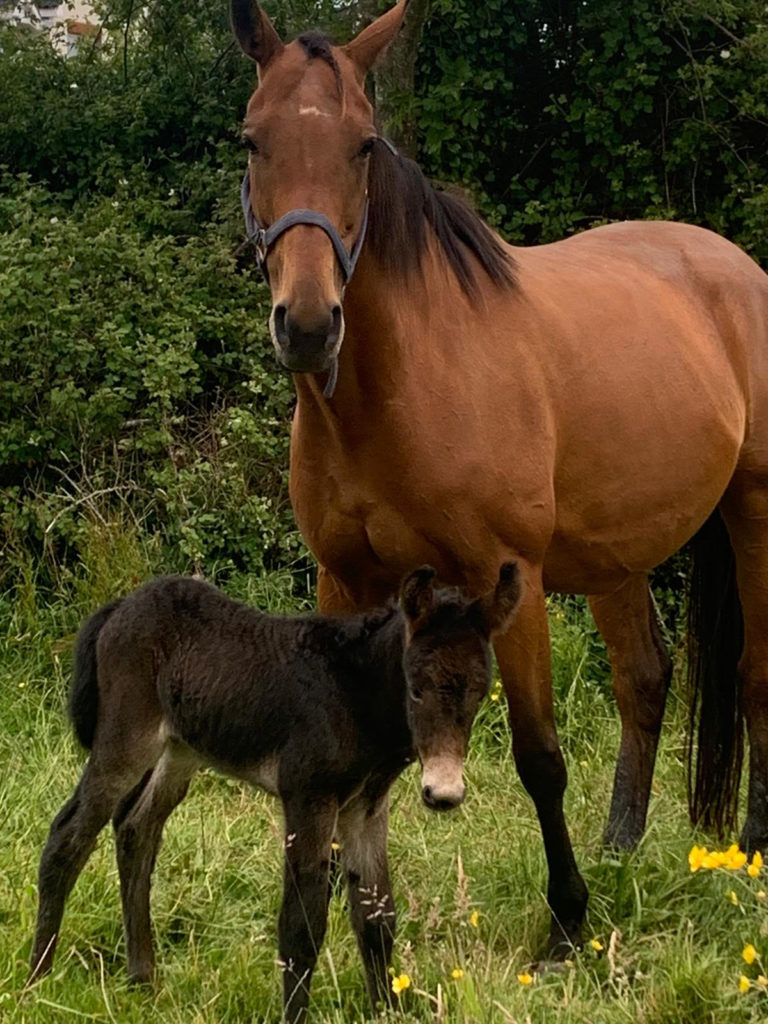 Robbie Cronin, third generation owner of Dan Cronin’s Pub and nightclub in the square in Newcastlewest, Co. Limerick arrived out to a field on his farm on Saturday 6th. June last to witness the shock of his life—His thoroughbred brood mare Jimmy’s Choice, a lovely 8 year old bay mare by Jeremy (USA) out of Amtara (IRE) gave birth to a beautiful black MULE FOAL, from the French Poitou Donkey Stallion Bob Marley owned by Robbie, and not the thoroughbred colt or filly foal he thought he was getting from a mating to the thoroughbred stallion Renaissance Man by Galileo, a very well-bred stallion that is standing locally at Western Road Stud owned by Donal Shine in Meelin, Co. Cork.

Robbie wanted to breed a racehorse by Renaissance Man by Galileo. Before this, his 15.2 hand high French Poitou Donkey Stallion Bob Marley had gone infertile he thought as he tried to cover three mares last summer but none of them went in foal. He left him off in a field with three mares including Jimmy’s Choice, knowing he will never breed again ! He covered the mare with Renaissance Man and left her in the field with Bob Marley and the other two mares. She was scanned 21 days later by Derrick Long of the Dealside Veterinary Clinic in Rathkeale, Co. Limerick and she showed up in foal ! He went up to the field owned by Jack O’Doherty, on Saturday 6th. June and knew she was going to foal that night –came back one hour later and could not believe his eyes—he saw a beautiful black Mule foal-he had to think—is it or isn’t it?

Robbie is a member of the Irish Donkey Society and shows his donkeys and mules at the RDS and Balmoral horse shows every year.

A prize is being offered for entries to name the MULE FOAL. Entries to irishdonkeysociety@gmail.com where the Hon. Secretary of the IDS Helena Loney will make contact with the winners.