The story of Eve 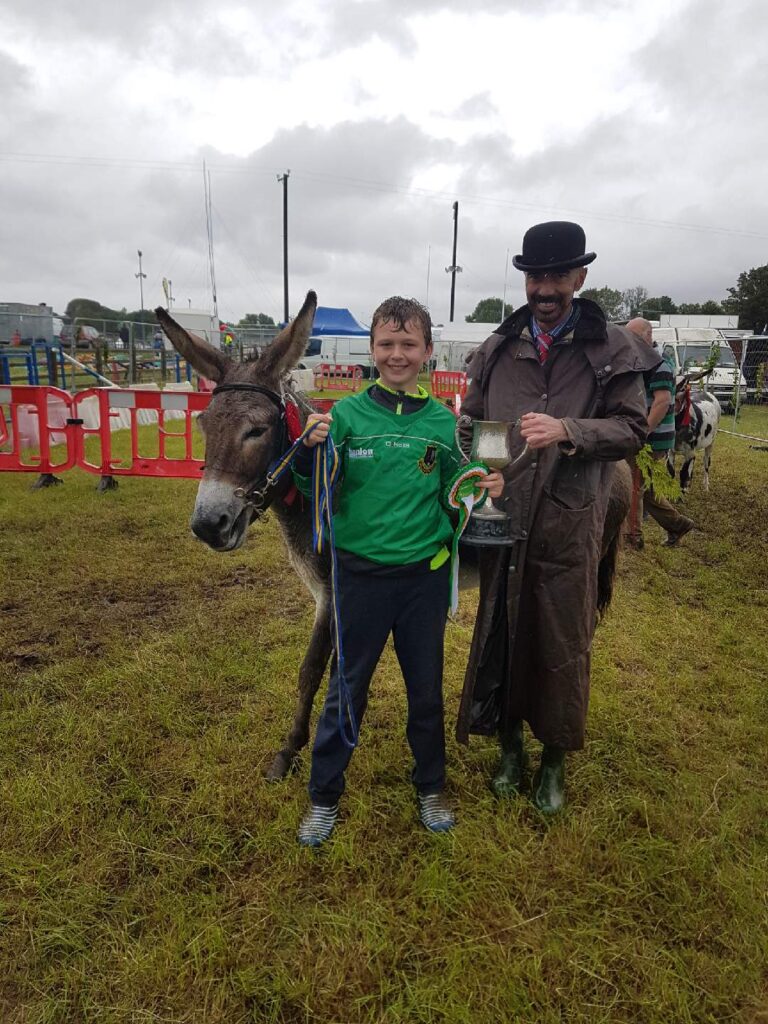 On a warm Saturday mid July 2018, the family all travelled for the first time to the Monasterevin Horse Fair just a few miles from Kildare town. We planned on just having a look around and enjoy the atmosphere, but being donkey lovers, there was always the chance that something with long ears might catch our eye!

We saw many ponies and cobs, some with foals, some under carts,  along with the rich variety of characters that travel the countryside selling second hand horse tack and vintage items, all enjoying the mix of sunshine and banter. No donkeys but a lovely morning never the less. Heading back to the jeep, we noticed a latecomer, leading a jennet and a grey donkey. Curiosity got the better of us and we took a closer look. The grey mare donkey was coating and looked the worst for wear-her feet had been cut with a saw and had huge pitted holes below the hairline and there was evidence that she recently had, or lost a foal . However, we also saw her lovely markings, the distinctive dark cross and her gentle nature. As we looked her over, I felt we would not be going home empty handed!

Within minutes, a deal was made and Eve came home to Crosspatrick later that evening. We gave her a worm dose, turned her out into a paddock and planned her rehabilitation.

It took a year of trimming, treatment and tlc and her feet were looking good. We felt she would do well in the show ring and along with 3 other donkeys, we headed to the Bonniconlon Agricultural Show in Co. Mayo on the August Bank Holiday Monday.

It became a horrendously wet day and the donkey classes are always last, after the horses. Competition at these shows in the west is tough- owners take their donkey business seriously, often with up to 17 or 18 mares in a class. David, aged 12 waited patiently, now in the third change of clothes that day and soaked to the skin. There were about 13 in the mare class. Eve performed well but we were up against stiff competition….to our delight they were pulled in first and presented with the red rosette!! Huge delight and excitement all round. We also had a winner in the coloured class, a mare called Lynott who we had bought previously in Ballinasloe-we now had 2 for the overall Championship which would also include winners of the stallion, youngstock and foal classes.

David and Eve took their places in the teeming rain, trotting up for the judge in the sodden show ring. Eve and another mare were pulled forward and we held our breath as the judge made his final decision.

We were overjoyed as he walked over to Eve and presented David with the Champions Cup! The rain was soon forgotten as we enjoyed the moment. This was the first time in its long history that the cup travelled east of the Shannon and it now sits proudly in our Kildare home.