Looking out for our Donkeys – Michael Slavin

Our Honorary President, Michael Slavin has just had the following article published in The Farmers Journal 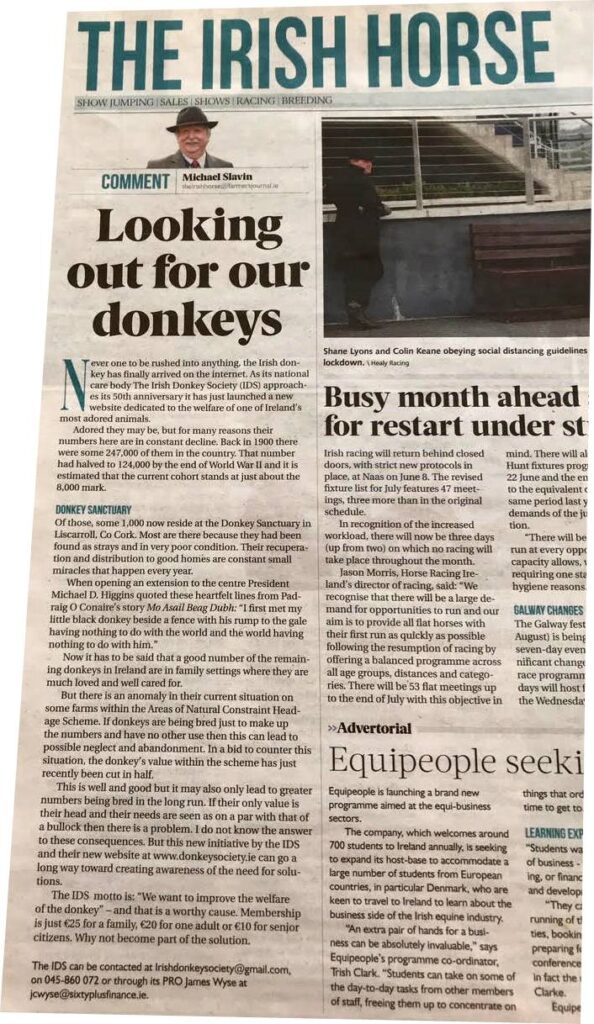 Never one to be rushed into anything, the Irish donkey has finally arrived on the internet. As it’s national care body, the Irish Donkey Society (IDS) approaches it’s 50th anniversary, it has just launched a new website dedicated to the welfare of one of Ireland’s most adored animals.

Adored they may be, but for many reasons their numbers here are in constant decline. Back in 1900 there were some 247,000 of them in the country. That number had halved to 124,000 by the end of World War II and it is estimated that the current cohort stands at just about the 8,000 mark.

Of those, some 1,000 now reside at the Donkey Sanctuary in Liscarroll, Co. Cork. Most are there because they had been found as strays and in very poor condition. Their recuperation and distribution to good homes are constant small miracles that happen every year.

Now it has to be said that a good number of the remaining donkeys in Ireland are in family settings where they are much loved and well cared for.

But there is an anomaly in their current situation on some farms within the Areas of Natural Constraint Headage Scheme. If donkeys are being bred just to make up the numbers and have no other use then this can lead to possible neglect and abandonment. In a bid to counter this situation, the donkey’s value within the scheme has just recently been cut in half.

This is well and good but it may also lead to greater numbers being bred in the long run. If their only value is their head and their needs are seen as on par  with that of a bullock then there is a problem. I do not know the answers to these consequences but this new initiative by the IDS and their new website at www. donkeysociety.ie can go a long way toward creating awareness of the need for solutions.

The IDS motto is “We want to improve the welfare of the donkey” – and that is a worthy cause. Membership is just €25 for a family, €20 for one adult or €10 for senior citizens. Why not become part of the solution.

This article is available to read online for those who have an account with The Farmer’s Journal website – https://www.farmersjournal.ie/looking-out-for-our-donkeys-547921