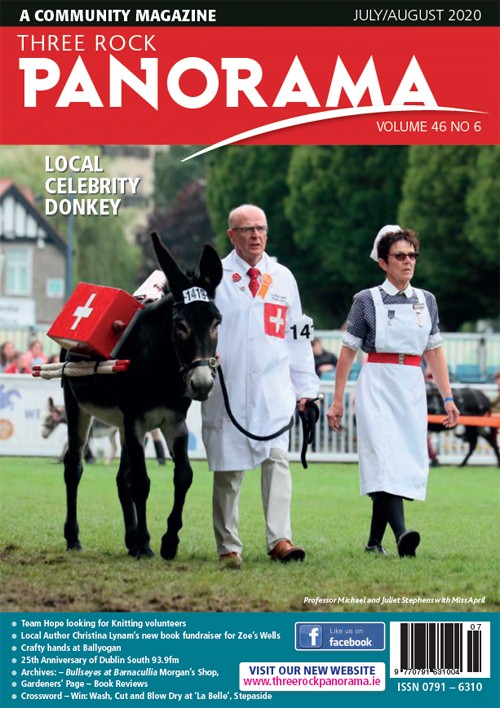 In 2018, on a glorious sunny Good Friday morning, we gathered in Kilternan for the traditional walk to Glencullen, on “The Way of the Cross”. As we walked in quiet contemplative mood chatting quietly and praying intermittently, the morning was suddenly shattered with a loud braying “Hee Haw! Hee Haw!” We were being treated to a royal welcome by Miss April and her friends, who were startled at the unusual activity on their normally quiet stretch of road frontage.

Little did we know it, but the attractive lady donkey leading this welcome was a “celebrity” in her own right. This was Little Miss April, the pride and joy of Michael and Juliet Stephens. Like all celebrities, Miss April is very fond of attention. She is thought to be a Spanish donkey. Michael says she is a great pet and a real character. Michael grew up with horses. His father was a veterinary surgeon and he kept horses and a donkey.

Michael, a retired Professor of orthopaedic surgery, has retained a lifelong interest in horses. When he and Juliet moved to Kilternan some years ago, they got their first donkey, Beechnuts, as a companion for their pony. When the pony died Juliet bought Miss April as a companion for Beechnuts. The badly neglected donkey needed a number of visits from the farrier to treat her hooves. The latest arrival is Lily.

Michael is an active committee member of the Irish Donkey Society, a charitable association set up in 1972. The aim of the I.D.S. is: “to uphold and improve the status of the Irish donkey, to improve its welfare and to create an awareness of this dignified and much-loved animal”. Miss April made her debut on the celebrity circuit a few years ago when she won top prize in the donkey class at the Kilmacanogue Show. It was onward and upward from there.

Horses and donkeys are the oft-forgotten heroes of the Great War. There were 288,000 donkeys and mules involved in WW1 by the British army. Many Irish donkeys were included. Other countries have memorials to their armies’ equine contingents, but Ireland does not yet have such a monument. Recently however a purple poppy has been introduced, to honour the equines who lost their lives in the war.

The RDS was a remount station for training horses and donkeys from all around Ireland, prior to their transfer to the front. In one day’s shelling over 70,000 equines were killed.

In 2016, to mark the centenary of 1916, Michael and Miss April did their first display at the RDS. They were back again in 2018 on the Sunday of the Horse Show, to commemorate the centenary of the end of WW1. Michael was in costume wearing the boots worn by his father in El Alamein with the 9th Lancers Cavalry Division. Along with Juliet, Michael and April appeared at the Dublin Port WW1 seminar in 2018, demonstrating how donkeys carried vital medical supplies to the front.

Miss April and her companions are donkeys that have landed on their well-tended hooves and they are happy to tell the neighbourhood about their good fortune, with a few regular resounding Hee-Haws.