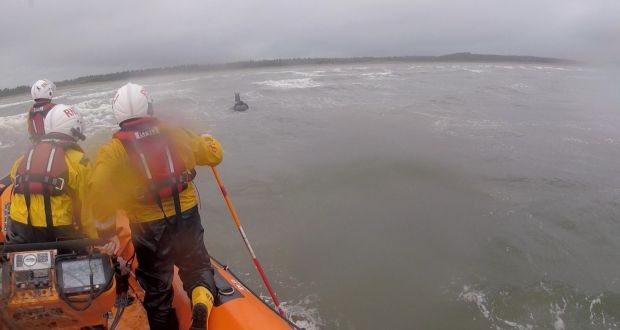 A runaway horse was rescued by the RNLI after swimming more than 1.5km out to sea off the coast of Donegal.

The distressed animal called Valentine was coaxed out of four metres deep Atlantic waters on Monday evening near Bundoran.

The town’s lifeboat crew was unable to go too close in case it tried to jump into the boat, press officer Shane Smyth said.

He added: “It could have turned out much worse, particularly if the horse’s head had gone under the water, it would not have been a nice outcome.”

The volunteer crew was called to Murvagh beach, a relatively secluded area between Bundoran and Donegal town. It is on an inlet which is not Atlantic-facing.

The horse’s owner was with it when the animal bolted into the water, Mr Smyth added.

The crew spent almost an hour trying to guide the horse back to shore.

Mr Smyth said: “They did not go too near it because they did not know what the horse was going to do.

“They thought it could jump into the lifeboat.”

They just directed it with the boat and stayed around 10 metres away.

Mr Smyth added: “There was enough noise and movement from the boat to nudge it back towards the shore.

“Once it got in it got more shallow and the horse was able to walk out.

“The horse swam for about an hour, which is an intense amount of time for an animal to swim.”

Lifeboat helmsman Killian O’Kelly said it was another call out with a good outcome.

He added: “Animals are as prone as people to get in trouble in the water and we were glad to be able to help out on this occasion.”–PA