Good News for Donkeys in Kenya 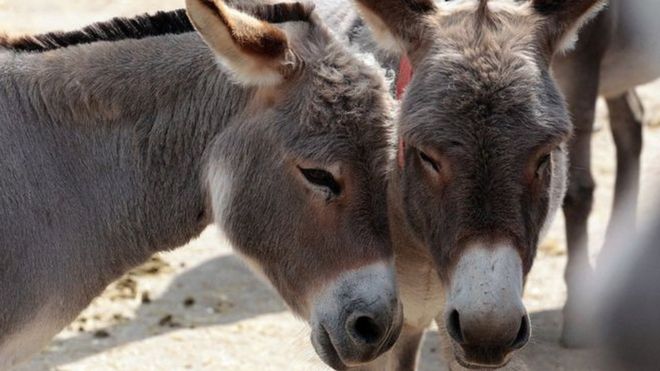 In 2019 there was widespread outrage against the trade in donkey skins for the Chinese medicine market. Hundreds of thousands of donkeys in Africa and the Far East were rounded up and slaughtered for their pelts which fetched a high price. Recently Kenya announced a nationwide ban on of the skin trade and has closed four donkey slaughterhouses in the country. This announcement is vital in protecting the lives of thousands of donkeys across East Africa.

The Brooke has information as to how to add your name to a petition calling for a global ban on slaughtering donkeys for their skins.

For anyone not familiar with the charity known as The Brooke, it was formerly known as The Brooke Hospital for Animals and was set up in 1932 by an Englishwoman, Mrs. Dorothy Brooke to care for the horses, donkeys and mules abandoned in North Africa after the end of World War 1.

Abattoirs in Kenya will be banned from slaughtering donkeys from next month, the agriculture minister has said.

The East African nation legalised trade in donkey meat and hide in 2012 to meet growing demand in China.

Minister Peter Munya said the decision had been a mistake as it had caused the donkey population to fall.

Many people in rural areas use donkeys to fetch water and firewood, raising fears that their dwindling numbers will increase the workload of women.

Kenya has about 1.2 million donkeys compared with 1.8 million a decade ago, according to government data published last week.

Women and men from farming communities protested outside Mr Munya’s offices in the capital, Nairobi, on Monday to demand action to protect the donkey population.

“When donkeys are stolen or killed, women are turned into donkeys,” read a placard held by the protesters.

Mr Munya later told reporters that abattoirs licensed to slaughter donkeys had a month to switch to slaughtering other animals – or else they would be closed.

“The policy of slaughtering donkeys for meat was not well thought out,” the minister said.

“The benefits that are brought by the traditional work that donkeys do are much more than whatever benefit you might get by slaughtering a donkey and eating the meat,” he added

Kenya has four abattoirs licensed to slaughter the animals.

Brooke East Africa, a donkey advocacy group, estimates that at least 1,000 donkeys are slaughtered each day in Kenya.

The value of an adult donkey more than quadrupled in Kenya after their meat was legalised for human consumption in 2012, according to the Africa Network for Animal Welfare.

There is huge demand for donkey skin in China.

When skins are boiled, they produce a brown gelatine, which is the essential ingredient in Chinese “ejiao” products – popular health foods and traditional medicines.