Co Down little-donkey therapy story was balm for the soul 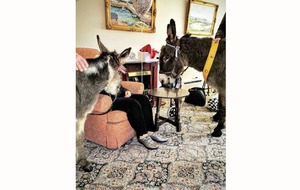 In a crisis, a donkey – as well as a pint of plain – is your only man. City foxes are bolshy beasts – there is one that has the cats of Ardoyne terrified. But donkeys are kind. I love them.

It’s probably because in my one and only starring role in the nativity play at primary school, I was cast as the donkey. Why did the nun put me in that role? It was unusual, far from the shepherd in the tea towel headgear… better not dwell.

It was humbling – tramping around pretending to be a donkey minus the furry costume as the other children sang Little Donkey. My little sister got to be Mary, mother of God, in a blue silk scarf to match her turquoise eyes. At eight, you learn that life ain’t fair.

This grá for donkeys is also linked to all those holidays in the wilderness of 1960s Connemara on the shores of Loch Muc. There was not a soul for miles and the only friendly face on the empty bogs of Ireland was a donkey’s. Slip him a carrot and he’s a mate for life.

The joy rose again when the story of a donkey therapy centre popped up on my computer. I’m not your typical Horse & Hound reader but Eleanor Jones’s tale of the Co Down mother and son Amanda and Robert Wallace and their Kinedale donkeys was balm to the soul.

The word “donkey” is so often the butt of a joke or an insult, but it’s just not true, they said. For his first birthday, Robert was given a donkey foal and the love grew from there – they now have 24 donkeys.

Some day, I’m going to have to go and visit Denis, who is the star donkey. He has hoofed it on the opera stage in Dublin – like myself, he was an extra. He now does a star turn in nursing homes and schools.

“There’s something about Denis, you might worry about him standing on people’s feet but he picks his up round them,” said Robert.

“He even goes in lifts to see those who can’t leave their bedrooms and puts his head on their laps.”

Denis sounds a right character. The donkeys help older people with dementia relive happy memories. The Wallaces say it is humbling to hear that a woman who never talks to anyone asked to see Denis again or a woman who’s 102 years old and blind can tell which donkey is which by the feel of them.

Donkeys bring me back in my childhood to summer visits from my grandfather, who was in his 80s then. He was a dapper gentleman. He stood in our bathroom in his vest and long-johns using a bowl of suds and a cut-throat razor to shave.

He wore a sharp three-piece suit with a waistcoat where he kept a fat gold watch on a chain. His breakfast began with a glass of raw egg in milk, downed in one.

My mother brought him to a nearby lane to feed the donkeys and Shetland ponies. They loved barley sugar and butted each other to get to grandad’s outstretched hands. He gave the offending animal a rap on the nose for being greedy.

Once, when we were feeding said donkeys, a woman came up and said to my grandad: “This is private land, you know.”

That story still tickles my mother. She tells it to me down the phone from her faraway home. It’s been a long quarantine. We’re all getting weary as the little donkey, head bent, hooves trot trotting all the way to Bethlehem.

It seems like another lifetime since I pulled into the driveway under the cherry tree to my childhood home. We talk donkeys on the phone.

“Thistle and darnel and dock grew there. And a bush, in the corner, of may…”

The donkey in that poem was one Nicholas Nye, she tells me – and I tell her about Denis, the wonder donkey who takes the lift and offers his head to people.

Some day, I tell her, some day we shall trip trap to Co Down to say hello.